A.R. Penck artist, painter and printmaker, A.R.Penck is the pseudonym of Ralf Winkler. Born in Dresden in 1939, he adopted the Pseudonym to avoid detection from the Stasi in East Germany. His first solo show was at the Museum Haus Lange in Krefeld in 1970. He had a retrospective at the Bern Kunsthalle, Switzerland, and won the Will Grohmann prize of the West Berlin Academy of Arts (both 1975). In 1979, after his studio and its contents were destroyed by the state police, he escaped to West Berlin. From the late 1970s onwards, Penck flourished. His work was included in the Zeitgeist show at the Martin–Gropius-Bau , Berlin in 1982, A New Spirit in Painting at the Royal Academy of Arts in 1981 and at the Tate Gallery 1983; Venice Biennale in 1984;  His international reputation was secured. 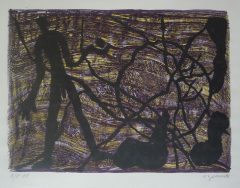