Alistair Grant a painter, illustrator and printmaker, born in London but spent much of his childhood in his mother’s home town of Etaples in Northern France. He kept a house in Etaples all his life.  Grant studied at Birmingham College of Art (1941-43), and, after serving in Egypt with the RAF during the war, he returned to art school and furthered his education studying at the Royal College, where he was taught by Carel Weight and Ruskin Spear. Attracted to printmaking, he studied lithography with Edwin la Dell and etching with Robert Austin. Grant became a great and justly-revered experimental printmaker. Best known as a printmaker, his entire teaching career was spent in the printmaking department at the Royal College of Art,. Grant was at the top of his profession and a ground breaking in his explorations of mixed media techniques. He was also an initiator and as a young tutor he had seen the potential of screen-printing for artists and introduced it into the department. He incorporated photo-imagery and encouraged wide artistic practice – making books, painting, sculpture, photography and drawing

He worked in the printmaking department of the Royal College for 35 years (1955-90), acting as Head of Department 1970-1990 and as Professor of Printmaking (Emeritus} 1984-1990.    He insisted that all the teaching staff should be practising artists. Grant also had a strong entrepreneurial streak. In the Eighties he initiated the Royal College’s Printmaking Appeal Fund which published two of the most important print portfolios of the last few decades in order to raise funds for the printmaking students. Over the years he taught printmaking to many who were to become leading UK artists. 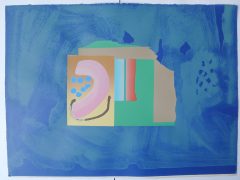