Andy English    British 1956-
Andy English was born in Denver, a small village in Norfolk, England in 1956. He studied Geology at the University of Reading and taught in Cambridge, England from 1979 – 2006 where he was widely respected. As an artist he is self-taught, he drew and painted since childhood, but in 1991 he started to engrave on wood. This immediately became his main artistic output. In 2008, an article by Paul Wheatley describes how, after trying lots of different printmaking methods, English engraved for the first time and found it to be so natural and comfortable that he could only describe it as remembering a process rather than learning it.

Andy English was elected to the Society of Wood Engravers in 1997 and became an elected member of the Cambridge Drawing Society. While studying for a master of Arts at the University of London in the early 1980s, English researched the use of online information systems and developed a website that explained how wood engravings are created, introducing many people to this method of printmaking for the first time. The presentation of the material on the web has gradually been refined over many years and his new website has many photographs of the process to aid students of engraving.

English is a notable engraver. His detailed images often contain visual puns and hidden elements and his typical subjects include gardens, wildlife and childhood. He has illustrated many books, including two for Barbarian Press of Canada and in the 25th anniversary biography of the press, it describes Andy as “an enthusiastic, congenial & Intelligent Illustrator”. He is also an important designer and engraver of bookplates’ Paul Weaver describes him as working unhurried and in detail through a lens before printing the bookplates in a Victorian handpress. 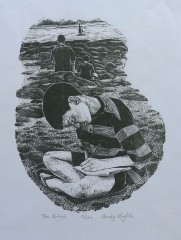