Anton Schutz was born in Berndorf, Germany of Franco-German parents. Schutz studied mathematics and engineering before serving in the German Army during WWI. After the war he attended the University of Munich and the Royal Academy of Fine Art from which he received degrees in Engineering and Architecture. While still in Germany he established himself as a known etcher of landscapes and cities.

In 1924 Schutz emigrated to New York, where he studied and worked with Joseph Pennell at The Art Student’s League and quickly became an eminent etcher of the American city of the twenties. His works of this period are crowded with the new skyscrapers rising out of America’s downtowns and it bridges spanning urban rivers and harbors. By 1925 he had founded the New York Graphic Society, and in 1927 toured the country etching images of cities for The New York Times Magazine. He was also commissioned by The Times to tour the Soviet Union, Japan and China and capture these far flung locales in his etchings.

Subsequently, in keeping with the temper of the times, he made a series of etchings of the world’s major stock exchanges. In 1939, Bard Brothers published Anton Schutz: New York in Etchings, which contains facsimiles of his best known work, his images of New York City. Later in life his energies were devoted to publishing prints as President of the NY Graphic
society and to working with Unesco. His prints are in collections such as the NYPL, The British Museum, London, The Bibliothèque Nationale, Paris, and the Art Institute of Chicago. 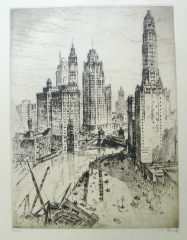 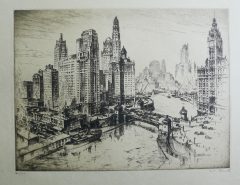 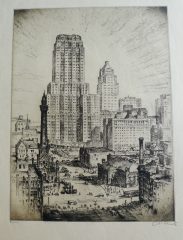