Blair Rowlands Hughes-Stanton  was a major figure in the English wood-engraving revival in the twentieth century. He was the son of the artist Sir Herbert Hughes-Stanton. He exhibited with the Society of Wood Engravers, but was more in sympathy with the philosophy of the English Wood Engraving Society, of which he was a founding member in 1925. He co-directed the Gregynog Press from 1930 to 1933 with his wife, Gertrude Hermes. 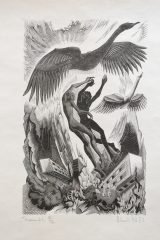