Charles Houghton Howard, artist and painter . Although born in Montclair, New Jersey, the family moved to Berkeley, California. After graduating from Berkeley High School, Howard enrolled in the University of California, re-entering after the First world War in 1919 studying journalism.

Howard moved to Paris, where many American expatriates gathered. Howard met painter Grant Wood and they toured Italy. This experience encouraged him to return to New York City to begin painting. Although Howard had no formal training in art, he simply began to draw and paint, learning the basic techniques in the New York studios of Louis Bouche and Rudolph Guertler. Whilst living in Greenwich Village, Howard spent his spare time creating satirical literary sketches which became the subject of his first one-man show at Whitney Studio Club in 1926. His work was included in the landmark exhibition by the art dealer Julien Levy that introduced European surrealism to the United States. There were only two other Americans in the show, Man Ray and Joseph Cornell.

In 1934 Howard married British painter Madge Knight and moved to London, England. Prior to the outbreak of WWII London was a centre for all types of international avant-garde artists who had escaped Nazism.  Howard soon became involved in London’s artistic circles and shortly after his arrival assisted the painter Edward Wadsworth on a mural for the De La Warr Pavilion at Bexhill. Through Wadsworth, Howard became associated with Unit One, a group of painters, sculptors, and architects influenced by Surrealism and Constructivism. Active with the English Surrealists, Howard participated in the International Surrealist Exhibition held at the New Burlington Galleries in 1936. He had his first British Solo show in 1935 in the Bloomsbury Gallery and at the Guggenheim-Jeune Gallery in 1939, both were in London

With the outbreak of World War II, Howard and his wife moved back to the USA, to San Francisco, which had become an oasis for the international avant-garde artists. Howard introduced European abstract surrealist expressionist and became influential in the art community. He was a designing supervisor of the Works Progress Administration and lecturing on surrealism in a series with Salvador Dali, Man Ray, and the poet Georges Lemaitre at the California School of Fine Arts in 1945.

During his stay in San Francisco from 1940 to 1946, Howards art gained national recognition. His paintings were included in Dorothy Miller’s show Americans 1942: Eighteen Artists from nine States in the Museum of Modern Art in New York and Peggy Guggenheim’s inaugural exhibition at her Art of This Century Gallery that same year.

Grace McCann Morley, director of the San Francisco Museum of Art, and Douglas MacAgy, director of the California School of Fine Arts, were also major supporters of Howard’s work through various exhibitions and writings. It was MacAgy’s wife, Jermayne MacAgy, who organized Howard’s 1946 retrospective at the California Palace of the Legion of Honor, where she was the acting director. During this period Howard’s art gained support from many prominent figures in the art world.

However, in 1946 Howard moved back to England and settled in Helions Bumpstead, Suffolk, where he continued to develop an austere minimalism, using primarily black, white, and grey paints. In 1959 he began teaching at the Camberwell School of Arts & Crafts in London whilst he continued to exhibit. He had solo shows  at the Whitechapel Gallery in 1956 & at McRoberts & Tunnard Gallery, in 1963, both in London. After six years of teaching at Camberwell, Howard retired and moved to Bagni di Lucca, Italy, where he died in 1978. 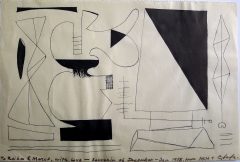 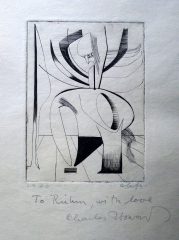