John Christopherson painter and artist in collage, born in London. Having become interested in art through collecting, he briefly studied at the Chelsea School of Art. Encouraged by Jean Dubuffet, Victor Pasmore and Anthony Caro, he began showing at mixed shows at the Leicester, Redfern and Mercury galleries. His first one man show was at the Hyde Park Gallery in 1961. After which he had a number of solo exhibitions at Marjorie Parr and England & Co., which gave him a memorial show in 1997. A Retrospective exhibition was held at Woodlands Art Gallery in 1972 and in 1995. Arts Council hold examples of his work. 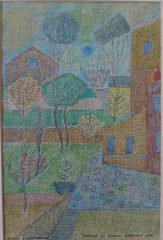