(American 1928-)
Claes Oldenburg was born in 1929, in Stockholm. His family settled in Chicago in 1936 and become an American Citizen 1953. Oldenburg studied literature and art history at Yale University, New Haven, from 1946 to 1950; He studied art at the Art Institute of Chicago from 1950 to 1954. During the first two years of art school, he also worked as an apprentice reporter at the City News Bureau of Chicago, and afterward opened a studio, where he made magazine illustrations and easel paintings.

In 1956 he moved to New York and met several artists making early Performance work, including George Brecht, Allan Kaprow, George Segal, and Robert Whitman. Oldenburg soon became a prominent figure in Happenings and Performance art during the late 1950s and early 1960s. In 1959 the Judson Gallery exhibited a series of Oldenburg’s enigmatic images, ranging from monstrous human figures to everyday objects, made from a mix of drawings, collages, and papier-mâché. In 1961, he opened The Store in his studio, where he recreated the environment of neighbourhood shops. He displayed familiar objects made out of plaster, reflecting American society’s celebration of consumption, and was soon heralded as a Pop artist with the emergence of the movement in 1962.

Oldenburg made his first outdoor public monument in 1967; Most of his large-scale projects were made with the collaboration of Coosje van Bruggen, whom he married in 1977. In the mid-1970s and again in the 1990s, Oldenburg and Van Bruggen collaborated with the architect Frank Gehry, breaking the boundaries between architecture and sculpture.

Oldenburg had a solo exhibition of his work at the Museum of Modern Art, New York, in 1969, and with a retrospective organized by the National Gallery of Art, Washington, D.C., and the Solomon R. Guggenheim Museum, New York, in 1995. In 2002 the Whitney Museum of American Art in New York held a retrospective of the drawings of Oldenburg and Van Bruggen; the same year, the Metropolitan Museum of Art in New York exhibited a selection of their sculptures on the roof of the museum. 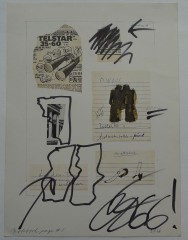