Painter, photographer, writer on music and a collector of Post-War art. He was born in Blackheath, south-east London, and during the 1940s he became a chartered surveyor. George and his brother, an architect, established ‘Trevor Dannatt and Partners’ in 1970. The brothers’ made art contacts through Trevor’s jobs, which included designing the Fitzroy Street Studio exhibitions of abstract art organised by Adrian Heath during the early 1950s.

George Dannatt’s decision to paint seriously in the mid 1950’s. He had was self-taught. He and Ann had purchased a house on the Wiltshire/Dorset border, this later became their main residence. In 1963 George and Ann visited Cornwall for the first time.  They began collecting art and meeting St.Ives artists.  Patrick Heron and Terry Frost were friends. Heron introducing the Dannatts to Denis and Jane Mitchell with whom they would holiday many times at Dartmouth in the coming years. An even more important contact was John Wells, whom Dannatt met in 1963 through Mackenzie. He became an associate of Penwith Society of Art and a member of the Newlyn Society of Artists.  Dannatt had several shows in Penzance and a solo show at Newlyn Art Gallery in 1976.  Including a retrospective in 1981. The bulk of his collection was donated to Pallant House, Chichester. 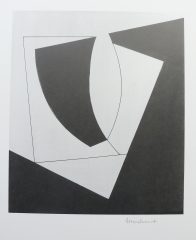