David Hockney, a British painter, printmaker, graphic artist, photographer, theatre designer, teacher and writer. Born in Bradford, Yorkshire, he studied at Bradford School of Art in 1953-57. As a conscientious objector, he did his National Service as a hospital orderly. During this period he read Proust and was inspired by Alan Davie who was exhibiting at Wakefield at this time. After his National Service Hockney attended the Royal College of Art 1959-62 where he was encouraged by his fellow student Kitaj, to move away from abstraction. From then on his personal interests including his homosexuality, became the subject of his Art.
Impressed by the Picasso show at the Tate in 1960, he titled his own contribution to the 1962 Young Contemporaries Show ‘Demonstrations of Versatility’, announcing his decision to be unbounded, like Picasso, by any single style. He gained international success from his mid-twenties winning awards whilst he was still at the Royal College and later the John Moore’s Prize in 1961 and 67, besides many international awards.
After a visit to Egypt in 1963 and on the proceeds of his successful series of etchings, ‘A Rakes Progress’ , he moved to Los Angeles. There he exchanged oils for acrylic paint which encouraged his preoccupation with flatness and clearer definition. His use of photographs for source material further encouraged a more realistic style. In 1966 he produced ‘Illustrations for Fourteen Poems from C.P.Cavafy’, a series of etchings which led him on to his illustrations for ‘Six fairy Tales’ by the Brothers Grimm, both published by the Petersburg Press, in 1970 .
He was elected RA in 1991. His work is held world –wide in all the major galleries and institutions.
Since then he has continued to work in a variety of media, producing photo portraits, designs for the theatre and opera, Fax Art as well as etchings, lithographs and paintings. A brilliant draughtsman, some of his best work has been produced with pen and ink. His first major retrospective was held at the Whitechapel Art gallery in 1970, since then he has exhibited world-wide as an artist of international stature. 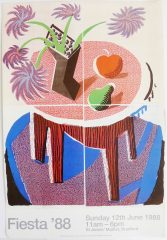 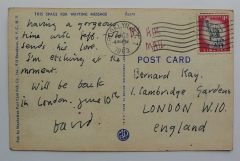 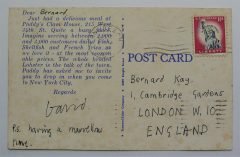 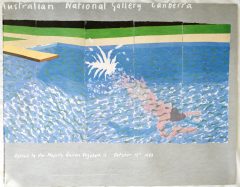 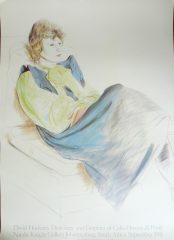