Denis Mathews, painter, printmaker, draughtsman and critic. Born in London, son of Canadian artist Richard George Mathews. He studied at the Slade School of Fine Art 1930-3 and 1935-6. He worked as a medical artists and during the Second World War he exhibited in war artist exhibitions. From 1945-56 he was the secretary of the contemporary Art Society. His work reflected his travels. He illustrated Pierre Poupon’s and Pierre Forgeot’s ‘A Book of Burgundy’ which was published in 1958. He exhibited at Leicester Galleries, Redfern gallery, his first solo show was at Leicester Galleries 1947. Here was a retrospective of work done 1940-1975 at Bartley Drey Gallery in 1994 and another at Y Tabernacl, Machynlleth, 1997. He lived for many years at Felin Fach, Brecon. 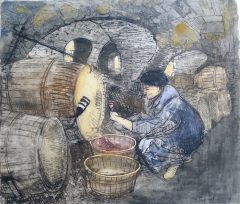