Edward Ardizzone painter and  illustrator, was born in Indochina. He was the son of a Frenchman and a Scottish mother, who was art trained.  Arizzone returned to England and studied in evening classes at Westminster under Bernard Meninsky and F.J.Porter in 1920-21. After working as a clerk for a few years, he decided to study at Central School of Art in 1926. After receiving a small legacy, he gave up his job as a clerk in a shipping office to be a full time artist. His first solo exhibition was at the prestigious Leger Galleries in 1930’s. During the Second World War he was made into an Official War Artist  and worked widely in Europe and North Africa. Ardizzone wrote and illustrated numerous books, including children’s. His work belongs to a long tradition of British illustrators and drew inspiration from everyday people.In 1962 he was elected ARA and RA in 1970. In 1974 Ardizzone was created a Royal Designer for Industry.
His work is several major public collections including the Tate Gallery, Victoria and Albert and British Museum. He had a Retrospective at the V & A Museum in 1974 and lived in Rodmersham Green, Sittingbourne, Kent. 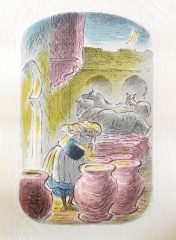 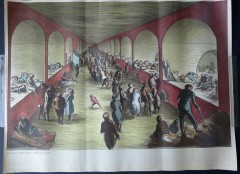