Edwin Smith photographer,  was born in Camden Town, London in 1912 and left school at the age of twelve to train as a builder. He studied architecture at the Architectural Association and practiced briefly before turning to photography full time in the 1930s.

In 1935 Smith married Rosemary Ansell, but the marriage ended in divorce two years later. By this time Smith was living with Olive Cook, whom he married in 1954. Smith was also a writer, producing photographic handbooks, including All the Photo Tricks (1940), for Focal Press.  It is for his photograph books he is best remembered. His work during this period varied from social documentary through plant and flower studies to advertising shots for Vogue, a commission he obtained on recommendation from the artist Paul Nash. In the 1950s he was commissioned by Thames & Hudson for a series of ground-breaking books, among them English Parish Churches (1952) and English Cottages & Farmhouses (1954). These were to herald a succession of further publications filled entirely with his evocative photographs, often alongside eloquent texts by his wife, the art and architectural historian Olive Cook. Covering subjects such as landscape, gardens, topography and architecture, these reached a popular audience and saw Smith demonstrate above all his ability to convey a sense of place. 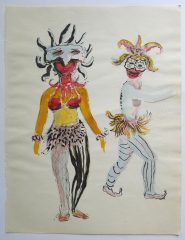