Elisabeth Frink, a British sculptor and print maker. Born in Suffolk she studied  at the Guildford School of Art (1947) and  continued her studies at the Chelsea School of Art (1949–53) under the sculptor,Bernard Meadows.  Her first solo show was in 1955 at St.Georges Gallery and  her first major commission was in 1957. In 1958 she joined Waddington galleries who became her dealer/agent.  She taught at Chelsea (1953-60) and St Martin’s School of Art (1955-7). In 1959 she had exhibitions in Los Angeles and New York and  she became a full time sculptor. She lived and worked in France between the years 1967-73. In 1969 she was awarded an CBE for her work. In 1973 she returned to England and got  a studio in Southwark for three years enjoying the stimulus of the city. She later moved to Wollard, Dorset , where she set up her studio. In 1977  Frink was elected a member of the Royal Academy and in 1982 she was created a Dame of the British Empire.  She remained living and working in Wollard until she died. She was a highly successful female sculptor and exhibited widely, her work being in many collections around the world. 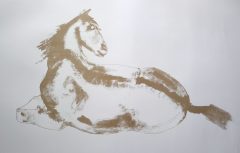