Elizabeth Blackadder, painter and print maker.  Blackadder was born in Falkirk and studied at Edinburgh University and at Edinburgh College of Art. She is a member of the Royal Scottish Society of Painters in Watercolour, the Society of Scottish Artists and the Glasgow Institute and is an Honorary Fellow of the Royal Incorporation of Architects in Scotland.A painter in oils and watercolours, as well as a prolific print maker of etchings and lithographs, she exhibits with the societies listed above, and has had many one-man shows since 1959. In London she has been represented by the Mercury Gallery since 1965. She has travelled in Italy, France and Japan. She was a lecturer at Edinburgh from 1962 to 1986.

She has executed some portrait commissions: ‘Molly Hunter’ (Scottish National Portrait Gallery); ‘Lady Mitchison’ (National Portrait Gallery, London). Her work is in many other public collections in Britain and the United States, including the Tate Gallery, The Scottish National Museum of Modern Art in Edinburgh, Glasgow Museum and Art Gallery and the Museum of Modern Art, New York. 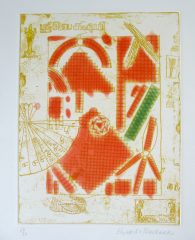