Fred Uhlman born in Germany into a prosperous middle-class Jewish family. He studied at University and in 1923, he graduated with a degree in Law followed by Doctorate.In March 1933 Uhlman moved to Paris, but he encountered lots of difficulties and  Uhlman had supported himself by drawing and painting, and selling his work privately when he could.In September 1936 Fred Uhlman, like many Jews,immigrated to England, with no money and unable to speak the language. However, within two months he married Diana Croft. They set up home on Downshire Hill,Hampstead, London.Hampstead had become a  favourite cultural and artistic meeting place for the large group of refugees and exiles who, like Uhlman, had been forced to flee their homeland. He founded the Free German League of Culture, whose members included Oskar Kokoschka &  Stefan Zweig. Nine months after the outbreak of the Second World War, Uhlman, like thousands of other enemy aliens, was interned on the Isle of Man but was released six months later and reunited with his wife and with his daughter.

Uhlman had his first solo exhibition at the Galerie Le Niveau in Paris in 1935. In London he exhibited at the Zwemmer Gallery in 1938, from then on he exhibited regularly in one man shows as well as mixed exhibitions throughout the UK.. A retrospective exhibition of his work was held at the Leighton House Museum in London in 1968. His work is represented in many important public galleries, including the Fitzwilliam Museum  in Cambridge and Victoria & Albert Museum  in London.

Uhlman also wrote. He published his memoirs in 1960 and a book on Hans Schwartz, another artist with whom he had a close friendship with, an exile Jew who lived in Greenwich, London. 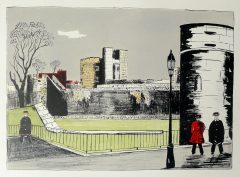