Gavin Turk  British 1967-
British artist Gavin Turk was born in Guildford and attended the Royal College of art. He gained notoriety in 1991 when he was denied his MA certificate for his degree show in which Turk exhibited an empty white studio with a blue English Heritage plaque commemorating his occupancy with the inscription “Borough of Kensington/Gavin Turk/Sculptor/Worked Here 1989-1991.” This set the tone for the artist’s subsequent work, critiquing the construction of artistic myths of authorship, creativity and genius. His work was collected by Charles Saatchi and he came into prominence as one of the infamous Young British Artists (YBAs).
Turk often uses his own image and signature in his sculptures and installations to address issues surrounding authorship, authenticity and identity; questioning the amount of value the artist’s name gives to the work. His most renowned sculpture sees Turk as a life-size waxwork in which he adopts the identity of Sid Vicious singing “My Way” in the pose of Elvis Presley as depicted by Andy Warhol. Turk and his partner Deborah Curtis have since been running a project based group of artists since 2008 called The House of Fairy Tales designed to further educational community projects to support and advocate art.
Turk has exhibited in several significant exhibitions including the 46th International Istanbul Biennial, Istanbul in 1999; Material Culture, Hayward Gallery, London in 1998 and Sensation: Young British Artists from the Saatchi Collection, Royal Academy of Arts, Saatchi Collection, London in 1995. Recent exhibitions have included: Gavin Turk-Me as Him, Riflemaker, London; Gavin Turk: The Negotiation of Purpose, GEM Museum for Contemporary Art, The Hague, The Netherlands; Gavin Turk: Last Year in Eggenburg (The Paradise Show), Schloss Eggenburg, Graz; The Golden Thread, Sculpture at Goodwood, West Sussex; Gavin Turk: et in arcadia eggo, New Art Centre Sculpture Park & Gallery, Salisbury; and Gavin Turk Oeuvre, Tate Britain Sculpture Court Display, London.
Text From: The Brick Lane Gallery 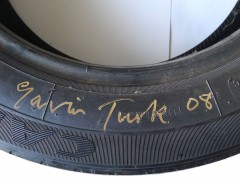 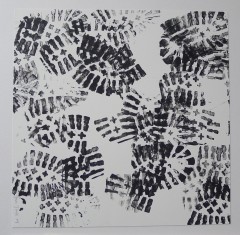