George Elmer Browne was a popular American Impressionist of the late 19th and early 20th centuries. He was born in Gloucester, Massachusetts, in 1871. After studying at the Museum of Fine Arts and the Cowles School of Art in Boston, Browne travelled to Paris and attended the Academie Julian, as a student of Jules Lefevre and Tony Robert-Fleury. When Browne studied in Paris he often summered in Dournenez in Brittany. Dournenez is just south of the large port of Brest. At the turn of the century, the area became an artist’s colony, attracting many well known artists.
On his return to the United States, he set up a studio in New York City. Summers were spent at Provincetown, Massachusetts.
He was a member of the most prestigious artists’ societies exhibiting extensively throughout his career and won numerous awards. According to Peter Falk (Who Was Who in American Art): Browne “was a popular Impressionist painter, active in the US and abroad.” His works are held in the collections of the National Gallery, the Toledo Museum, and the Art Institute of Chicago, among others. He is listed in: Falk, ‘Who Was Who in American Art 1564-1975’ and Fielding, ‘Dictionary of American Painters, Sculptors and Engravers’
Highly regarded in France, Browne was named Officer of Public Instruction and Fine Arts, and made Chevalier of the French Legion of Honor in 1926. He died in Provincetown in 1946. 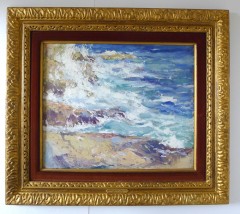