Robert Graham, sculptor and printmaker. A Mexican-born American sculptor who was celebrated for his civic monuments, many of them massive in scale and all of them sculpted in bronze. Robert Graham began his formal art training at San Jose State University   where he was taught by artist Frederick Spratt.  He continued his studies at the San Francisco Art Institute in California, finishing in 1964. By the late 1960s, Graham had one-man exhibitions of his sculpture at important contemporary art galleries in Palo Alto, Los Angeles, New York City, London, Cologne, and Essen, Germany. He, along with family members Joey and Steven, lived in London for a period before settling in Los Angeles in the early 1970s. His first solo exhibition in a museum was at the Dallas Museum of Art in 1972. Since then he has had several one-man shows, including at the Los Angeles County Museum of Art.

Graham is also acclaimed for his many smaller-scale works, especially his sculptures of the nude female figure. Graham was enormously productive throughout his career. He explored the female nude throughout over many years, in prints, sculpture and drawing.  Graham received the California Governor’s Award for the Arts in 1993, and he was inducted into the California Museum’s Hall of Fame in 2008. 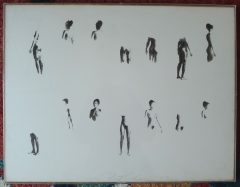