Henri Hayden, painter and print maker, born in Poland in 1883. In 1907 he moved to Paris and made France his permanent home. His first one-man exhibition was in 1911 at Galerie Druet, and later exhibited a large painting at the Salon des Independants in 1914. He was recognised as a School of Paris painter, whose early work was influenced by Cubism. Hayden’s Cubist period lasted from 1916 to 1921. He met the sculptor Jacques Lipchitz and Juan Gris and the two painters became good friends. He became friends with other leading artists of the day including  Metzinger, Severini and Picasso. After 1921 a more pronounced and fluid figuration emerged in his work. He mainly painted landscapes and still-life. After 1960, he simplified his forms and structures. He had a major retrospective in 1979. 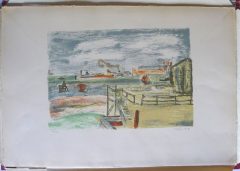