Henry Moore was born into a mining family in Castleford, Yorkshire.A Sculptor in wood, stone and bronze,He obtained a scholarship for Castleford Grammar School and in 1919, after the First World War, he gained a scholarship to Leeds School of Art, going onto the Royal College of Art in 1921-24. After receiving a travelling scholarship he visited France and Italy in 1925 before returning to the Royal College to teach until 1935.His first solo show was in 1928 at the Warren gallery. It was at the RCA that he met Leon Underwood and was taught wood engraving at his studio, producing his first wood cuts for an edition of ‘The Island’. After leaving the Royal College, Moore taught at Chelsea School of Art until 1939, by then he was able to live off his own work. He belonged to the ‘7 & 5 Society’ and ‘Unit One’ and had his work in many contemporary exhibitions. During the war he published a series of drawings from his London Blitz Underground sketchbooks ‘The Shelter Sketch book’ published by Poetry London in 1940. he also went into the mines to draw a series of miners at work. In his life time, besides his sculpture, he produced about 700 prints, mainly lithographs, some illustrating large folios or in series. Moore was internationally honoured, became a Companion of Honour in 1955 and he was awarded the Order of Merit in 1963. Moore lived at Much Hadham, Hertfordshire, where his house and grounds helped to form the Henry Moore Foundation 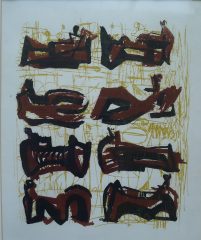 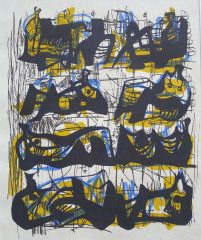 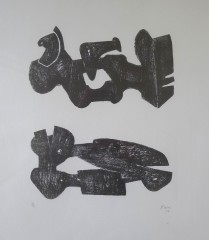 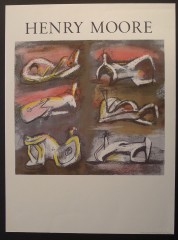 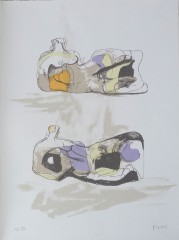