American artist. He trained at Maryland Institute College of Art, Baltimore (BA 1976), and worked as a Wall Street commodities broker before embarking upon his career as an artist. In the 1980s he won international recognition as a radical exponent of Neo-Geo  an American movement concerned with appropriation and parody. Following the example of Pop artists of the 1960s, Koons used his work to reflect the commercial systems of the modern world. He also referred back to the Duchampian tradition, appropriating an art status to selected products. His vacuum cleaners encased in perspex (1980–81; see 1993 exh. cat., pls 5–9) were classified as monuments to sterility. His immaculate replicas of domestic products, advertisements, Kitsch toys and models exercised an enthusiastic endorsement of unlimited consumption, unlike the veiled criticism of some work of the first generation of Pop artists. Koons perceived Western civilisation as a driven society, flattered by narcissistic images and with a voracious appetite for glamorous commodities. 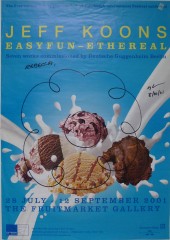