Spanish 1893-1983
Joan Miro was born in Barcelona in 1893. At the age of fourteen he went to business school in Barcelona whilst he also attended La Lonja, the academy of arts in the same city. After completing his art studies he took a position as a clerk. After suffering a nervous breakdown he resumed his art studies, attending Francesc Galí’s Escola d’Art in Barcelona from 1912 to 1915.In 1917 he met Francis Picabia.
In 1919 Miró made his first trip to Paris, where he met Pablo Picasso From 1920, Miró divided his time between Paris and Montroig. In Paris he associated with the poets Max Jacob, Pierre Reverdy and Tristan Tzara and participated in Dada activities. In 1924 Miró joined the Surrealist group. Miró was included in the first Surrealist exhibition at the Galerie Pierre that same year. He visited the Netherlands in 1928 and began a series of paintings inspired by Dutch masters. That year he also executed his first papiers collés and collages. In 1929 he started his experiments in lithography and his first etchings date from 1933. During the early 1930s he made Surrealist sculpture-objects incorporating painted stones and found objects. In 1936 Miró left Spain because of the Civil War; he returned in 1941.
That year Miró began working in ceramics with Josep Lloréns y Artigas and started to concentrate on prints. From 1954 to 1958 he worked almost exclusively in these two media. In 1958 Miró was given a Guggenheim International Award for Murals for the UNESCO Building in Paris; the following year he resumed painting, initiating a series of mural-sized canvases. During the 1960s he began to work intensively in sculpture. He also illustrated many books with original lithographs for the leading publishers of the day. Miró died on December 25, 1983 in Palma de Mallorca, Spain.
Exhibitions
José Dalmau Gallery, Barcelona 1918 (solo)
Galerie la Licorne, Paris 1921 (solo)
Salon d’Automne, Paris 1923
Galerie Pierre, Paris 1925
Museum of Modern Art, New York 1941. (retrospective)
Grand Palais, Paris 1974.
Musée National d’Art Moderne, Centre Georges Pompidou, Paris, 1978 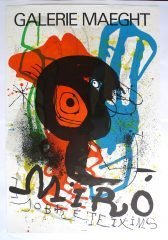 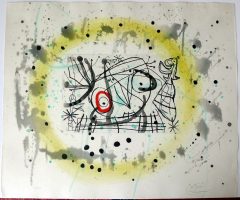 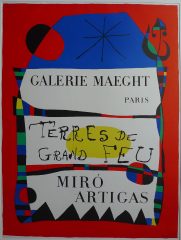 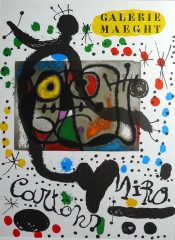 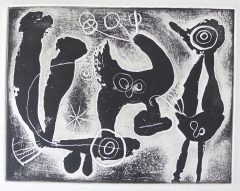 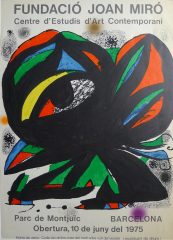