The son of a commercial bookbinder and a teacher, John Banting was born in Chelsea, London on 12 May 1902. He made drawings  and poems under the influence of  Vorticism at the age of eighteen. While working as a clerk, he attended life classes at Vincent Square art school under Bernard Meninsky (1921) and the free academies  in Paris, including the Grande Chaumière and Colarossi’s (1922). By 1925 he had established a studio in Fitzroy Street and was associated with the Bloomsbury Group; he made designs for Leonard and Virginia Woolf’s Hogarth Press and for the ballets Pomona (1929) and Prometheus (1936) at Sadler’s Wells. He was notable for shaving his head (a response to premature hair-loss), and for his relationships with Nancy Cunard and the poet Brian Howard.

In Paris in 1930, Banting was drawn to Surrealism, the results of which emerged in his exhibition at the Wertheim Gallery the following year. He shared Cunard’s outrage at racial prejudice, stayed with her in Harlem, New York in 1932 and contributed to her Negro anthology (1935). In London, Banting painted and produced commercial and decorative designs; he also wrote and illustrated his satirical A Blue Book of Conversation (published in 1946). He contributed to the International Exhibition of Surrealism in 1936, and represented an avowedly Stalinist position within the Trotskyist Surrealist movement. He accompanied Cunard on a three month visit to Spain during the Civil War (Oct. – Dec. 1937) and in Madrid attempted to join the International Brigade, then in the process of disbanding. After contributing to the Exposition Internationale du Surréalisme (Paris, Feb. 1938) through Marcel Duchamp’s invitation, Banting had a solo exhibition at the Storran Gallery (London, Oct.). At the beginning of the war he was declared unfit for active service, but worked as an art director for the Ministry of Information’s Strand Films with Dylan Thomas and Curtis Moffat. Less officially, he also served as art editor for the leftist monthly Our Time (1941) and co-edited the anthology Salvo for Russia with Cunard (London 1942). After a period in Ireland (1947), Banting was saved from extreme poverty by a grant from the Artists Benevolent Fund secured by Julian Trevelyan. In the 1950s he lived in Rye, Sussex also the home of his friend Edward Burra, subsequently moving to Hastings (1965). Although he produced few painting in his last years and devoted considerable time to writing, Banting regularly contributed earlier works to Surrealist exhibitions. He died at Hastings on 30 January 1972 between solo exhibitions in London at the Hamet Gallery (Dec. 1971) and Edward Harvane Gallery (March-April 1972). 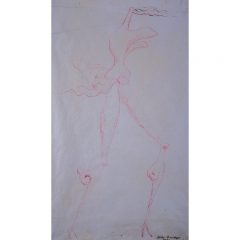