John Bratby,  painter, writer and teacher, was born in Wimbledon. Bratby was conscripted but swiftly discharged because of extreme myopia, and managed to obtain an ex-service grant to take him to the Kingston College of Art (1948–50) and continued his studies at the Royal College of Art (1951–4). Some stability was brought into his life in 1953 when he met and married his fellow- student Jean Cooke, then a sculptor and potter, now an acclaimed painter. The next year Bratby was given his first one-man exhibition, at the age of 26, at the celebrated Beaux Arts Gallery. His professional career was launched with this success, followed by the first prize in the John Moores Junior Section in 1959, and Guggenheim Awards for 1956, 1957 and 1958. In 1954 he first exhibited at the Royal Academy, to which he was elected an Associate in 1959 and a full member in 1971.

The drabness after the Second World War when rationing was still in place brought about the ‘Kitchen Sink School’. The social realism brought Bratby into contact with Jack Smith, Edward Middleditch (b 1923) and Derrick Greaves (b 1927), and these artists became the main exponents of the Kitchen sink school. Bratby became an international name almost overnight, and the first artist media pop-star, several years before Hockney. In 1956, Bratby and the other so-called Kitchen Sink painters – Edward Middleditch, Jack Smith and Derrick Greaves – were chosen to represent Great Britain at the Venice Biennale. He had become a very successful artist and he could afford to buy a large house in Blackheath for his ever growing family. Then in 1960, he was dropped, as he said, ‘like a cold potato’. Fashions changed, and abstraction, soon to be followed by Pop Art, ousted Kitchen Sink. To try and make money, Bratby wrote several books which were published. However by 1977 his marriage to Jean Cooke was dissolved. He met Patti Prime, an actress, through a Lonely Hearts column, they married in 1977. This brought Bratby great happiness and changed his art style. Patti and travel became the inspiration for much of his later work.

In 1991, Bratby had a major retrospective at the National Portrait Gallery;  a reassessment of the Kitchen Sink Painters at the Mayor Gallery and an exhibition of his new work at the Albemarle Gallery, London. These shows  brought Bratby back into the critical limelight. 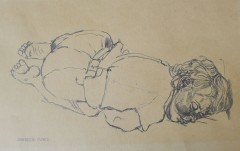