Hoyland was born in Sheffield to a working-class family. He was educated from the age of 11 in the junior art department at Sheffield College of Art progressing to the senior school four years later.The work in his finals show at the Royal Academy Schools, London, in 1960, was ordered off the walls by the then president of the Royal Academy, although Hoyland was still awarded his diploma. Within months, he was exhibiting with some of the best British artists of the day in Situation, a show of “large abstract paintings” organised by the artists themselves with a little help from the critic Lawrence Alloway. Situation kickstarted the 60s art scene, and London quickly became one of the most exciting art capitals in the world.

Hoyland was the youngest artist in the show, and his career followed a spectacular trajectory over the course of the decade. After showing in the follow-up exhibition, New London Situation, in 1961, he was taken on by Marlborough, at that time the most prestigious commercial gallery in London. In March 1964, Hoyland was featured in Bryan Robertson’s  New Generation showcase of young painters at Whitechapel Art Gallery, joining a brilliant galaxy of rising stars including Patrick Caulfield, David Hockney, Paul Huxley, Alan Jones and Bridget Riley. Not long after, he embarked on an astonishing series of huge acrylic canvases of high-key deep greens, reds, violets and oranges deployed in radiant fields, stark blocks and shimmering columns of ultra-vibrant colour. It was an achievement in scale and energy, sharpness of definition, originality and expressive power unmatched by any of his contemporaries, and unparalleled in modern British art. Visiting the studio in late 1965, Robertson immediately proposed a full-scale exhibition at the Whitechapel. His one-man exhibition at that gallery in the spring of 1967 was a defining moment in the history of British abstract painting. It consolidated Hoyland’s reputation, and established him without question as one of the two or three best abstract painters of his generation anywhere in the world.

Hoyland went to live and work in the United States in the late 1960s, and he was welcomed into the company of New York artists and critics including Clement Greenberg, Robert Motherwell, Helen Frankenthaler, Barnett Newman and Kenneth Noland. In 1973 Hoyland returned to England. In 1979, he selected the Hayward Annual, an exhibition that remains a landmark in the history of British abstract painting. In 1988, he curated an important exhibition at the Tate Gallery of late paintings by Hofmann. He was elected Royal Academician in 1991, appointed Professor of the Royal Academy Schools in 1999. In 2006, Tate St Ives held the exhibition John Hoyland: The Trajectory of a Fallen Angel, bringing together paintings from 1966 to 2003.  He was His work appears in public and private collections worldwide. 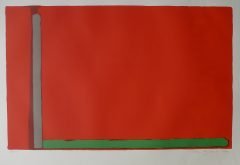