John Harrison Levée was one of the leading American artists in Paris during the post-war period along with Sam Francis. A prominent exponent of Abstract Expressionism or Abstraction Lyrique, as it was known in France, Levée established an international reputation with numerous museum exhibitions. These works are outstanding examples of the artist’s powerful style which uniquely combines both the American and European inspirations for this epoch-defining Modernist movement.

Having been born in California Levée attended the Institute of Art there with fellow students Mark Rothko, Clifford Still and Richard Diebenkorn, before finding himself in the Second World War fighting to liberate France in 1944. Following which he went to New York to continue at art school with Stuart Davis and Abbe Rattner, and then obtained a grant to study in Paris on the G.I. Bill. He arrived back in Paris in 1949 and enrolled at the avant-garde Academie Julian in 1950 where he met fellow American artist Sam Francis. In 1951 he held his first solo exhibition at Galerie 8, and also began exhibiting at the Salon d’Automne, the Salon de Mai and the Salon des Réalités Nouvelles. Numerous exhibitions ensued including “Peintres les Americains en France” Galerie Craven in 1953,  “Dix Jeunes Peintres de l’Ecole de Paris” Galerie de France in 1956, “Antagonismes” Musée des Arts Décoratifs in 1960, and the famous annual “L’Ecole de Paris” exhibitions at Galerie Charpentier from 1958-1961.

Levée also quickly established an international reputation, exhibiting at the Museum of Modern Art in New York in 1957 and 1958, the Whitney Museum NY in 1957, 1959 and 1965, Carnegie Institue 1958, Museum of Modern Art Jerusalem 1963, Phoenix Museum of Art Arizona 1964, Museum of Tel Aviv 1969, Palm Springs Museum 1977. Throughout this period he also held regular exhibitions at the New York art dealer Andre Emmerich and in London at Gimpel Fils. A major retrospective of the artist’s work was held at the Musée d’Art Moderne in Toulouse in 1983. 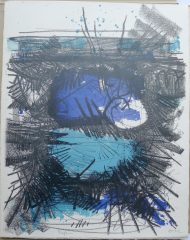