John Nash, painter, wood engraver and illustrator. Nash was born in London and was the younger brother of Paul Nash. He worked as a journalist for a local paper but, encouraged by his brother and without academic training, turned to watercolour landscapes and comic drawings. John Nash exhibited with his brother at the Dorien Leigh Galleries 1913  and became a member of the Friday Club in the same year, joining the London Group in 1914 and the Cumberland Market Group in 1915. He eventually had his first one-man show at the Goupil Gallery 1921. John Nash had also joined the  New English Arts Club and the Society for Wood Engravers in 1921, the Modern English Water-Colour Society 1923; A.R.A. 1940, R.A. 1951. From 1916-1918 he fought in World War 1 with the Artists Rifles and worked as an official war artist from 1918. Between 1918 and 1921 he lived at Gerrards Cross. During the day he and his brother Paul worked on their great war paintings at a nearby farm.  Nash taught at the Ruskin School, Oxford, 1922–7 later at the Royal College of Art in London, 1934–40 and 1945–57. At the onset of World War Two he joined the Observer Corps 1939 and became the Official War Artist to the Admiralty in 1940. After the war, Nash moved to Essex at Wormingford, near Colchester and had a Retrospective exhibition at the Leicester Galleries 1954. He lived in Wormingford for the rest of his life, his brother Paul, whom he had been close to, had died in 1946. 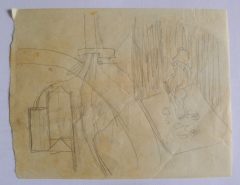 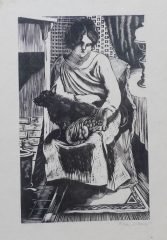