Olwen Jones, painter, printmaker and teacher, wife of the artist Charles Bartlett. She studied at Harrow School of Art, 1960–5, and Royal Academy Schools, 1965–8, and her engraving teacher was Gertrude Hermes. She was a part-time lecturer at Harrow School of Art, 1970–88, lecturing in printmaking at the City and Guilds of London Art School, 1993–4. Took part in many mixed shows, including A Survey of Influential East Anglian Artists, Chappel Galleries, Chappel, 1991. Was a fellow of the RWS and RE. She had a first solo show at Zaydler Gallery, 1971, many others including Chappel Galleries, 1999, Bohun Gallery, Henley-on-Thames, 2002, and John Russell Gallery, Ipswich, 2004. Jones gained several prizes, later ones including Chris Beetles Watercolour Prize, 1989.

National Museum of Wales, Cardiff; Reading Museum; and Nuffield Foundation hold her work. Jones was a notable watercolourist, her work having a translucent quality. Lived in Fingringhoe, Essex. 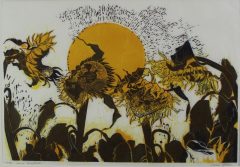