Julian Opie is a sculptor and digital artist associated with the New British Sculpture movement, and best known for portraits that reduce subjects to essential lines and colour planes.  He born in 1958 in London and graduated in 1983 from Goldsmiths School of Art, where he was taught by Michael Craig-Martin. He lives and works in London.

Opie has exhibited widely in the UK and internationally, with major museum exhibitions including shows at Kunstverein in Cologne; Hayward Gallery and ICA in London; Lehnbachhaus in Munich; K21 in Dusseldorf; MAK in Vienna; Mito Tower in Japan; CAC in Malaga and IVAM in Valencia; MoCAK in Krakow; Tidehalle in Helsinki and Fosun Foundation in Shanghai; Suwon IPark Museum of Art in Korea, as well as the Delhi Triennial, Venice Biennial and Documenta.

Opie’s works can be found in many public art collections, including Tate, British Museum, Victoria & Albert, Arts Council, British Council and National Portrait Gallery in London, The Museum of Modern Art in New York, ICA in Boston USA, Essl Collection in Vienna, IVAM in Spain, The Israel Museum in Jerusalem and Takamatsu City Museum of Art in Japan. 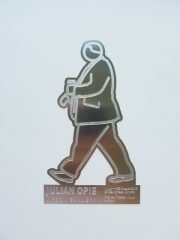