Julian Trevelyan was a renowned artist and printmaker. Born in Surrey in 1910, initially gaining recognition for his 1930s Surrealist prints, he later found true enjoyment and pleasure as an artist in rural and industrial landscapes. It wasn’t until 1931, when he joined S.W.Hayter’s famous print workshop, Atelier 17, in Montparnasse, Paris, that Trevelyan had any formal training. Whilst under the guidance of Hayter, Trevelyan developed a keen understanding for printmaking and etching. During the early 1930s Trevelyan worked alongside Ernst, Kokoschka, Miró, Masson and Picasso. During that time Trevelyan’s work was experimental and he began to develop his own unique style, incorporating everyday objects and portraying them with a dreamlike and childlike quality. In early 1934 Trevelyan returned to England but continued to rely on technical advice from Hayter. In 1935 he set up his etching studio at Durham Wharf in Hammersmith, where he remained until his death in 1988. It was here that he continued with the methods of etching learnt from Hayter, and developed a certain intimacy with the medium, constantly pushing it in new directions.

From 1955-63, Julian Trevelyan worked at the Royal College of Art and became Head of the Etching Department. Because of his enthusiasm in his work and the desire to share it with others, Trevelyan became a highly influential teacher, with students including David Hockney, Ron Kitaj and Norman Ackroyd. He was an important leader of modern print techniques and today is regarded as a silent driving force behind the etching revolution of the 1960s.Having had to quit his post as inspirational Head of Etching at the Royal College of Art Trevelyan went on his travels with his second wife Mary Fedden, each new journey sparking a new suite of prints. 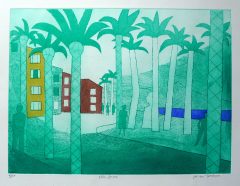