Laura Knight  British 1877-1970
Laura Knight ,painter, print maker and author. Born Laura Johnson at Long Eaton, Derbyshire educated at Brincliffe, Nottingham. She took private lessons in art from her mother, and then attended Nottingham school of Art aged thirteen under Wilson Foster. In 1903 she had her first painting accepted by the Royal Academy. She married a fellow student Harold Knight on his return from studying art at the Académie Julian, Paris. They started their newly married life together by moving to Staithies, Yorkshire where there was a small art colony, to paint. They moved to Newlyn, Cornwall in 1908 and joined the art colony there and stayed until 1918. In 1919 she was elected associate of the RWS (Royal Watercolour Society) and in 1927 associate of the RA. She became a full member of the RWS in 1928, a full member of the Royal Academy (RA) in 1936. In 1929 she became a Dame and she was living at St.John’s Wood, London. She worked in watercolours, oils, etchings including engraving‘s and drypoints. She is loved to draw from life using circus scenes, ballet and theatre. During the Second World War she worked for the War Artist Advisory Committee and as an official war artist painted at the Nuremberg Trials. In Her work is held at the Tate Gallery, British Museum, Imperial War Museum.
Exhibitions.
Royal Academy 1903
Leicester Galleries in 1906
Royal Academy ( Retrospective 1965) 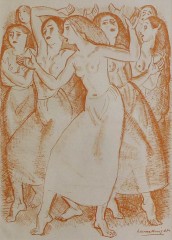