Lynn Chadwick ,sculptor and print maker.  Born in South West London and  trained at the Merchant Taylor School of Architecture , he later became a prominent British sculptor and printmaker, winning the Great International Prize for Sculpture at the 28th Venice Biennale.  Discouraged from becoming a sculptor due to the economic situation, Chadwick turned to architecture but preferred to work as a draughtsman for architectural firms. After the war, he won a textile design prize in a competition judged by Henry Moore and Graham Sutherland. This led to a contract for design with Linda Ascher which enabled him to move to Gloucestershire and set up as a freelance designer. Designing models, primarily as an architectural project, led Chadwick back towards his original vocation: sculpture. Hs early work in the late 1940’s early 1950’s, Chadwick was influenced by the American Sculptor Alexander Calder .His work was  displayed  by the London art dealers Charles and Peter Gimpel, who afterwards gave him a one-man show. Unique in that his tendency is to progress from an abstract form which he then invests with life, rather than vice-versa, Chadwick is perhaps better known as a sculptor. However his prints – mainly colour lithographs – are highly valued in their own right and show great technical skill. A large collection of Chadwick’s prints are housed at the Tate Britain Gallery in London. 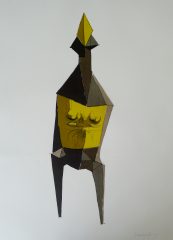