David Mach, sculptor, print maker and teacher. Mach was born in Scotland and attended Duncan of Jordanston College of Art in Dundee. He won a SED major travelling scholarship in 1978 after which he completed his studies at the Royal College of Art where he did an MA. In 1988 he was nominated for the Turner Prize at the Tate Gallery which was eventually won by sculptor Tony Cragg. In 1998 he was elected member of the Royal Academy of Arts.  He started teaching sculpture  as a professor at Edinburgh School of Art, University of Dundee and at the Royal Academy Schools. He has won several awards including Pat Holmes Memorial prize in 1975, Lord Provosts Award, Glasgow in 1992, Bank of Scotland Herald Angel Award in 2011 and Glenfiddich Spirit of Scotland Award also in 2011. Presently he works in London. 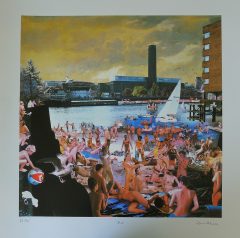