Marek Laczynski (Łączyński) was born in Warsaw. He was a partisan in WWII, while still in his teens and left Poland after the Warsaw uprising in 1944. Arriving in England with the Polish forces in 1946, he continued his studies. He attended Borough Polytechnic and the Central School of Arts and Crafts. Marek Laczynski exhibited at the Grabowski Gallery, London, in 1960 and 1964.

From 1964-1985 Marek Laczynski was Lecturer in Experimental Printmaking at Exeter College of Art and Design. In 1981 he was one of ten artists who contributed prints to the Printmakers Council Portfolio, alongside Anthony Gross, Gertrude Hermes, John Piper and Julian Trevelyan. The British Museum has 9 woodcuts by Marek Laczynski in its permanent collection. Since 1985 Marek Laczynski has lived in Vienna. 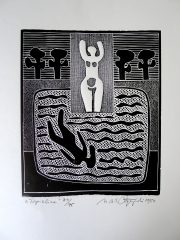