Marie Laurencin, French painter, printmaker and illustrator, was born in Paris, where she lived much of her life. At 18, she studied porcelain painting in Sèvres. On her return to Paris she continued her art education at the Académie Humbert, where she changed her focus to oil painting. She had early success and was an important figure in the Parisian avant-garde.  She was a member of both the circle of Pablo Picasso and the Cubists, exhibiting with them at the Salon des Indépendants and the Salon d’ Automne.

During the First World War, Laurencin left France for exile in Spain with her German-born husband, Baron Otto von Waëtjen, since through her marriage she had automatically lost her French citizenship. The couple subsequently lived together briefly in Düsseldorf. After they divorced in 1920, she returned to Paris, where she achieved financial success as an artist until the economic depression of the 1930s. During the 1930s she worked as an art instructor at a private school. She lived in Paris until her death. 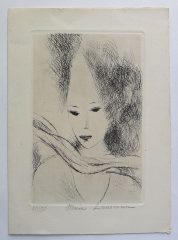