Nicholas Jolly, painter and illustrator, was born in Cheshire in 1962.  He studied Fine Art at Gloucestershire College of Art, after graduating, a self-portrait was accepted for the John Player Portrait Awards at National Portrait Gallery in London, which was purchased by the art critic Brian Sewell.  In 1985, Jolly decided to extend his studies and entered a three-year post-graduate diploma course at the Royal Academy Schools, London, where he developed a growing affinity with a new generation of figurative painting coming out of Germany and Scotland. On graduating he began to exhibit frequently in London. A major exhibition of his work held at Plymouth City Museum and Art Gallery in 1990, and in the following year his first solo exhibition was held at the Paton Gallery, London, where his work was bought for the collection of The Metropolitan Museum of Art, New York. In 1994 Jolly spent most of the year working in Connecticut, USA. On his return to London he began to exhibit at Beaux Art, London. Influenced by his time in the USA he developed an interest in vintage American magazines and their British 1950’s counterparts, such as Picture Post; portraying the formalized poses and contrived mannerisms of 1950’s advertising. In the same year, one of his large scale works was accepted by the Osaka Triennale, Japan,- winning a major purchase prize in the exhibition. In 1995, he exhibited in a widely publicized exhibition of Ten Young Painters of Promise. In 1996 Jolly received an invitation to participate in the highly prestigious Premio Marco exhibition at the Museo de Arte Contemporaneo de Monterrey, Mexico. Jolly decided to take a break from from full-time painting to embark on other projects. He started a humorous gentlemen’s magazine called The Chap. The magazine proved successful, resulting in a commission to write 4 spin-off books, as well as TV animation work. In 2005 he decided to return to painting and for the past four years he has continued to work from his studio in London. His success has continued to grow, with his work becoming exhibited widely in the US and in Europe. 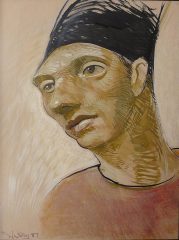