Oliver Bevan, an English artist, who was born in Peterborough and educated at Eton College. After a year working for Voluntary Service Overseas he returned to London to study painting at the Royal College of Art,  where he became strongly influenced by Op Art and in particular the work of Victor Vasarely. Bevan graduated from the RCA in 1964 and had his first exhibition of Op Art-inspired paintings the following year. Optical, geometric and kinetic art then served him well until the late 1970s when he moved to the Canadian prairies for a two-year teaching post at the University of Saskatchewan. By the time he returned to London in 1979 he had abandoned abstract art in favour of figurative art and urban realism.

Bevan’s first solo exhibition at the Grabowski Gallery, London, in 1965 attracted favourable reviews from critics such as John Dunbar, Norbert Lynton and Guy Brett. In a third exhibition at the Grabowski Gallery in 1969, it included a tabletop piece consisting of sixteen square tiles which were each divided diagonally into two of four colours and could be rearranged by the viewer to create different combinations of figure and ground. Bevan then developed the idea further, using six magnetic tiles on a square steel sheet that was covered with black canvas and could be hung on the wall like a painting. This new work, Connections, was shown at the Institute of Contemporary Arts in 1969–70 as part of Play Orbit, an exhibition of artworks that visitors could interact or ‘play’ with in the manner of toys and games. Bevan had also collaborated with the composers Brian Dennis and Grahame Dudley on a production at the Cockpit Theatre of Dennis’s Z’Noc, a thirty-minute experimental piece in which the musicians take their cues from a constantly changing display of abstract colours, shapes and shadows that Bevan created by projecting light onto three mobiles. This led Bevan to experiment with Polaroid as a medium for other types of kinetic art, and in 1973 he produced the first of his lightboxes using polarising filters and fluorescent tubes, with more complex versions employing electric motors and sets of slowly rotating discs. These lightboxes became the canvases for ‘chromatropic paintings’ which, as Bevan explained, enable ‘colours to be selected in time as well as space’, resulting in a mesmerising display of changing colours and shifting shapes as forms dissolved and reappeared.

Between 1974 and 1978 Bevan’s chromatropic or ‘time’ paintings were exhibited in London, Zurich, Detroit and Toronto, with pieces such as Turning World, Crescendo, Sunspot and Co-Incidence , now in the Government Art Collection.

On returning to London from Canada in 1979, Bevan rented a top-floor studio near Farringdon and began painting the local area around his studio and scenes from everyday life such as people in cars, on buses, crossing streets and, later, supermarket interiors. Solo exhibitions of his Farringdon paintings at two London galleries in 1981 and 1984 were followed by two at the Barbican Centre 1986 and 1993. He had a solo show at the Royal national Theatre in 1997 and in 2002.

In 2001 Bevan moved to Southern France and exhibited his work in Paris, Brussel, Montpellier and Avignon. 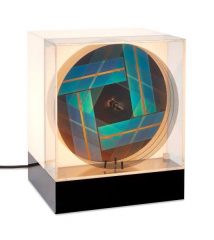