Patrick Heron, painter, textile designer and writer on art. Born in Leeds in 1920, he was the son of T.M. Heron, the founder of Cresta Silks and a Christian sociologist. In his early years he lived in St Ives. Heron studied at the Slade School 1937–9 and after the war, in 1945, he settled in London and began to paint again. He had his first one-man exhibition in London at the Redfern Gallery 1947 and in New York at the Bertha Schaefer Gallery in 1960. The emergence of the new abstract expressionist American painters such as Rothko who had their first show in London in the 1950’s, had a profound effect on many students and teachers alike. Patrick Heron turned to abstract painting in early 195o’s and moved to Zennor, Cornwall. He supplemented his income with writing and was the Art critic to the New Statesman and Nation 1947–50, and London correspondent to Arts (New York) 1955–8. A Retrospective exhibition was held at Wakefield Art Gallery and a northern tour in 1952. Other exhibitions included twelve paintings in the São Paulo Biennale 1953–4. He was awarded First Prize in the John Moores Liverpool Exhibition 1959.  He wrote The Changing Forms of Art in 1955. 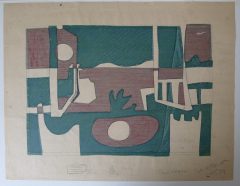