Paul Cezanne was born in Aix in 1839 into a wealthy family. In 1852, as a student of the Bourbon college (the present Mignet college) he met Emile Zola and Baptistin Baille. After passing his baccalaureate in 1859, he enrolled at the law faculty and at the same time he took courses at the local art school. Cezanne continued with his studies in law but painting played an increasingly important role in his life.  Cezanne having failed the entrance examination to the Ecole des Beaux Arts (fine arts) in 1861, returned to Aix to work in his father’s bank. Although his father had been against the idea of his son becoming a painter, he supported him and gave him an allowance to continue painting. In the years that followed Cézanne spent most of his time between Paris and Aix. It was when he worked at the Swiss Academy that he met Pissaro, Monet and Renoir.
From 1863 to 1880, his canvases were systematically refused by the traditional jury of the Salon. But by 1895 Cézanne had exhibited twice with the Impressionists, at the first Impressionist exhibition in 1874 and in its Third Impressionist exhibition in 1877.   A few individual paintings were shown at various venues, but it was not until 1895, when Parisian dealer, Ambroise Vollard, gave the artist his first solo exhibition. Despite the increasing public recognition and financial success, Cézanne chose to work in increasing artistic isolation, usually painting in the south of France, in Provence, far from Paris.
He died on 23 October at the age of 67. 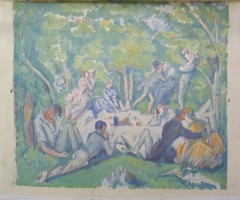