Sir Grayson Perry,  CBE RA ,is an English contemporary artist, writer and broadcaster. He is known for his ceramic vases, tapestries, and cross-dressing, as well as his observations and of dissecting British “prejudices, fashions and foibles”.

Born in 1960 in Essex, Perry did an art foundation course at Braintree College of Further Education from 1978 to 1979. He continued his studies completing a BA in Fine Art at Portsmouth College of Art and Design graduating in 1982.  He had an interest in film and exhibited his first piece of pottery at a New Contemporaries show at the Institute of Contemporary Art in 1980.

He has made a number of documentary television programmes and has curated exhibitions.

Perry has had solo exhibitions at the Bonnefantenmuseum, Stedelijk Museum Amsterdam, the Barbican Centre, the British Museum,  and the Serpentine Gallery  in London, the Arnolfini  in Bristol, The Andy Warhol Museum in Pittsburgh,[ and the 21st Century Museum of Contemporary Art, Kanazawa, Japan.His work is held in the permanent collections of the British Council and Arts Council, Crafts Council,  Stedelijk Museum Amsterdam, Tate and Victoria and Albert Museum, London. 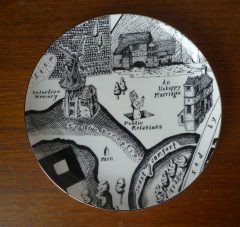