Peter Kinley painter of near-abstract landscape and figure subjects. Born in Vienna in 1926, he arrived as a child refugee in Britain in 1938. Kinley served in the British army 1944-48. He studied at Staatliche Kunstakademie, Düsseldorf, 1948-9 continuing his studies at St Martin’s School of Art, London. He exhibited in the ‘Six Young Contemporaries‘ exhibition at Gimpel Fils in 1951 and 1953. Kinley’s first solo exhibition was held in London in 1954 and in New York at Paul Rosenberg & Co. in January 1961. He showed with regularity at galleries in both America Europe, India and Australia. In 1982 a retrospective was held at the Museum of Modern Art, Oxford. He taught as Senior Lecturer at Bath Academy of Art from 1971-1975, and then as Principal Lecturer 1975-1988. Kinley died shortly after retiring from his Corsham post in 1988. 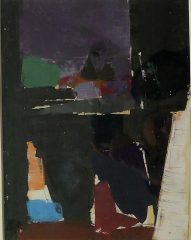