Peter Laszlo Peri, artist and sculptor, born as László Weisz in Hungary. When he moved to Germany, he was known as Laszlo Péri. After he moved to the UK, he adopted the name “Peter Peri“. His grandson, also an artist, born in 1971, has the same name Peter Peri.

Peri became politicised at an early age and was an ardent communist. In 1919, after finishing an apprenticeship as a bricklayer, and became a student at the workshops for proletariat fine arts. He studied architecture in 1919–20 in Budapest and Berlin. In 1922, he had the first of two joint exhibitions with Moholy–Nagy at Der Sturm Gallery in Berlin.

Peri immigrated to England in 1933, after his wife Mary, granddaughter of social reformer Charles Booth, was arrested in possession of Communist propaganda. In 1934, Peri contributed to the AIA (Artists’ International Association) exhibition The Social Scene. He lived in Hampstead, with other German emigres, he moved to a studio in Camden Town where he worked until 1966. In July 1938, he had a solo exhibition London Life in Concrete in an empty building at 36 Soho Square. In 1939, he became a British citizen and took the name “Peter Peri”. In November 1948, he held a solo show Peri’s People at the AIA Gallery and had a series of commissions for the London County Council. 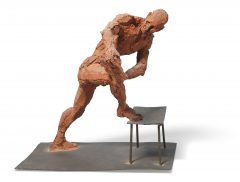