‘Pic’was the pseudonym of Charles Higgins. He was born in Argentina of Scottish parents. Having been wounded at Gallipoli, he returned to South America in 1919 to work as a construction engineer. Returning to Britain in the 1920s to devote his life to painting, he built a cottage on the Island of Barra in the Outer Hebrides and dived his time between there and his studio in St Johns Wood, London. He married Kate Elisabeth Olver the Portrait Painter in 1927.

In 1947 Pic’s work was shown in the first of many exhibitions at the Gimpel Fils Gallery in Mayfair, with frames by Robert Sielle. The Critic Maurice Collis wrote in the catalogue: ‘Those who like some sort of a peg upon which to hang a classification may summon the name of Chagall to give a hint of Pic’s poetical content , though his paintings do not resemble Chagall’s.

Nevertheless, his mood is of that sort and he depicts a state of mind that is shadowy, haunted, dream-led and fantastic.

Sometimes he achieves his effects by the help of the fortuitous surface, shape and peculiarity of the wood upon which he paints….. The paint, extremely accomplished, surges under his hand ;the colour has a fry crackle ;and there is a sombre fire in the mood. These, I submit, are extraordinary paintings which could hold their own in the most forceful company.’

Collis noted that prior to 1947 Pic’s paintings had only attracted the interest of ‘connoisseurs…. There are, thank God, a few people who know a good picture when they see it and who buy it without any assurance from third parties’. 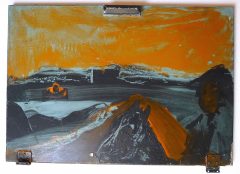 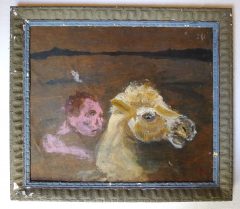