Prunella Clough, English painter, draughtsman and printmaker. She attended the Chelsea School of Art in London (1938–9), when her studies were interrupted by World War II, she became an engineer’s draughtsman and mapper (1940–45). From 1946 to 1951 Clough produced etchings, lithographs and paintings of fishermen and dockers in London, East Anglia and life in factories in the South East. Her work became more abstract. From the mid-1970s onwards, she exhibited at the New Art Centre and the Annely Juda Fine Art Gallery.  She had a major solo exhibition at the Camden Arts Centre in 1996. Prunella Clough was the winner of the 1999 Jerwood Prize for painting. 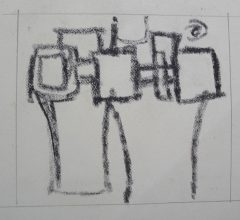