Raoul Dufy was born in the northern French port city of Le Havre. Being from a large family of nine children he left school to work at the age of 14. Together with his lifelong friend Emile Othon-Friesz, he studied art at night school. As with many progressive artists in the early 1900’s, Raoul Dufy was fascinated with the works of both Vincent van Gogh and Paul Cezanne who were having large scale retrospective exhibitions in Paris then for the first time.  In 1900, Dufy and Othon-Friez both received grants enabling them to attend the École des Beaux-Arts in Paris, where Dufy joined Bonnat’s studio. In 1902 he was introduced to Berthe Weill, who showed his work in her gallery. Marquet’s, Matisse’s and van Dongen’s paintings which Dufy saw at the Salon des Indépendants in 1905, were a revelation to him and led him to Fauvism. In 1906 Raoul Dufy gained attention as one of the artists exhibiting in the Paris Salon d’Autumne that the critics deemed Fauves (Wild Beasts)… Alongside his career as a painter, he also worked as a book illustrator and fabric designer. Dufy had an outstanding sense of colour honed by designing fabrics for the fashion designer Paul Poiret at Maison Bianchi-Ferier from 1910 onward.  He took up print-making as a result of his work with fabrics. He worked side by side with Georges Braque in the summer of 1908 in L’Estaque where they both painted landscapes in a Cubist manner. In 1913 he was showing his work in Berlin, New York, Chicago and Boston. During the First World War he worked mainly at designing and printing patriotic posters. It was only after the First World War that he found his own personal style. In the early 1920’s, the success of his one man show at Galerié   Bernheim-Jeune, Paris, enabled him to travel extensively to paint. When home in France, Dufy divided his time between Vence in the Midi and Saint-Adresse near Le Havre, Normandy. His travels made the artist keenly aware of the effects of light upon colour. He frequently visited Morocco, Cannes, Deauville and Trouville and his favourite subjects became bathers, regattas, casinos and palm trees, race courses and orchestras. Following World War Two he spent most of his time in Vence.His importance as an artist during the first half of the 20th century is inestimable and his works are shown in principal public collections worldwide. 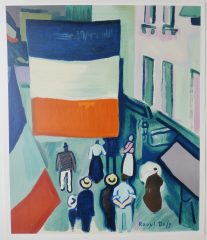 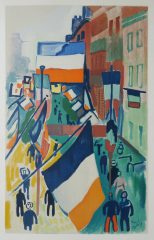 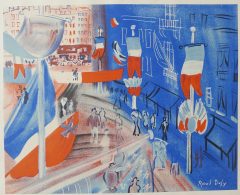