Painter, wood engraver and illustrator. Eric Ravilious was born in London but lived in Eastbourne, Sussex, where his father had an antiques shop. Eric Ravilious studied at  Eastbourne School of Art, 1919-1922 and at the Royal College of Art, where he entered the Design School. At the RCA his tutors were Paul Nash & William Rothenstein. Ravilious befriended Edward Bawden, another student at the RCA, with whom he became closely associated with. In the 1920s he made his early reputation with wood-engravings but by 1936 had started making lithographs with the Curwen Press and taking commissions for illustration and book jacket design whilst continuing to paint the southern English countryside.In 1926 he won a traveling scholarship to Italy. His output was prolific, both as watercolourist and wood engraver. In 1936 he was commissioned by Wedgwood to execute designs for pottery and china which still enjoys wide success. He was appointed Official War Artist in 1940, first with the Royal Marines, then with the Royal Air Force. He was killed in an airplane accident over Iceland. The Imperial War Museum held an important retrospective exhibition of his work in 2004 and he is represented in many public collections. 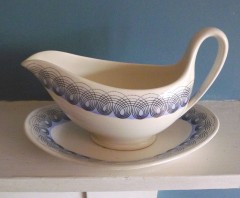