Rex Whistler,painter, illustrator and designer. Born in Eltham, London.  Rex Whistler attended the Royal Academy of Arts Schools in London under Charles Sims, but later transferred to the Slade School of Fine Art, London. He was one of the most highly regarded students of his generation. Rex Whistler had an academic education. He studied History of Art and Architecture. He developed his own style but was influenced by the classical painters such as Poussin, Claude, Watteau, Boucher and Canaletto and the Venetian muralists of the 18th Century.

After leaving the Slade, Rex Whistler became an illustrator, mural painter, stage & costume designer and a sought-after portrait painter for members of London society. His versatility somewhat clouded his reputation after the war but he is now celebrated for his accomplishments across a wide range of disciplines all carried out with a great ‘Joie de vivre’.

He died at the young age of 39 years serving his country in the Second World War. 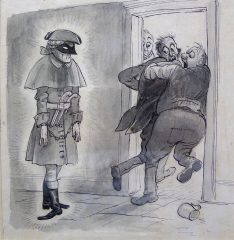 WHISTLER, Rex
Original pen and ink wash for Nash’s Magazine March 1935. One of 11 illustrations for ‘The English Year’ by Hector Bolitho. Whistler & Fuller 557 (3). Framed with label for Abbott and Holder of 30 Museum Street, London, #36012, marked as sold to Rachel Campbell. Image 170x180mm. A ;little thumbed and vertical crease centre-right.
SOLD 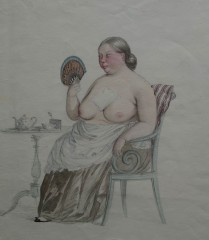