Ricard Cinalli, painter, set designer, mural and fresco painter. Ricardo Cinalli read Psychology at the University of Rosario, having previously studied Painting at the Academia Fornells and Piano at the Conservatorio Chopin. When he graduated from the University of Rosario in Argentina, a mentor offered to introduce him to Salvador Dali in London. In 1973, travelling by boat across the Atlantic via  Barcelona, Ricardo was delayed by two whole weeks. When he arrived in London, Dali was gone.  He continued his studies at Harrow School of Art and later on at Hornsey School of Art.

In 1980 he started to exhibit his works in various galleries and museums in Europe, North and South America and Australia. He exhibited at the Beaux Arts Gallery 1994 & 1996.  Over a career spanning more than thirty years, he has become internationally renowned for his works on canvas, his huge pastel drawings, his theatre designs and his murals which include a vast fresco in a cathedral in Umbria and now his magnum opus – more than five years in the making – a giant fresco covering all the walls of a custom-built edifice in Punta del Este in Uruguay.

He presently lives in Spitalfields, London. 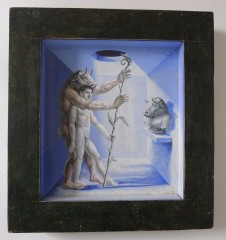