Richard Smith, painter, sculptor and printmaker, born Letchworth, Hertfordshire. After military service with Royal Air Force in Hong Kong, he studied at St Albans School of Art and later undertook post-graduate studies at the Royal College of Art in London. Richard Smith was awarded the prestigious Harkness Fellowship which facilitated his move to New York, where he had his first one man show at Green Gallery. Smith spent several years in New York painting and teaching.

Smith returned to England in 1963, where he gained critical acclaim for extending the boundaries of painting into three dimensions, creating sculptural shaped canvases with monumental presence, which literally protruded into the space of the gallery. After being awarded the Grand Prize at the 9th São Paulo Biennial in 1967 and important exhibitions at Kasmin Gallery in 1963, Tate in 1964, and Richard Feigen Gallery in 1966, Smith was invited to exhibit at the XXXV Venice Biennale as the official British artist in 1970.

Much of Smith’s early work was concerned with packaging and idea of American culture. He was never, however, interest in simply painting replicas of the objects he found interesting, but rather in trying to find ways of representing them in a two-dimensional form. His work gradually became more minimal, often painted in one colour with a second colour used only as an accent. In trying to find ways of transposing ideas, Smith began to question the two-dimensional properties of art itself, as well as the conventional materials of painting in the West – canvas and stretcher – and to find ways by which a painting could express the shape of reality as he saw it. He began to take the canvas off the stretcher, letting it hang loose, or tied with knots, to suggest sails or kites – objects which could change with new directions rather than being held rigid against a wall, and taking painting close to the realm of sculpture. These principles he carried into his graphic work by introducing cut, folded and stapled elements into his prints; some works were multi-leaved screenprinting, and others printed onto three-dimensional fabricated metal. 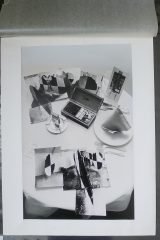 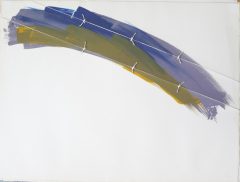 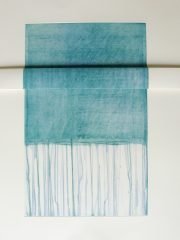 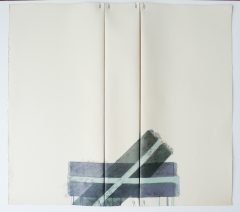 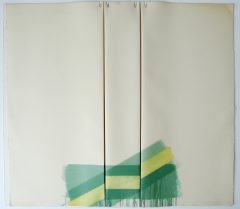 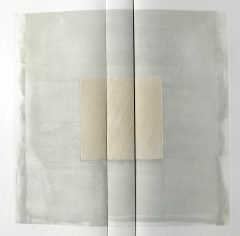 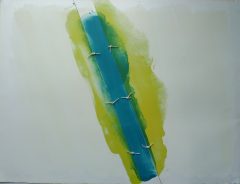 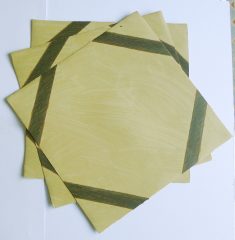